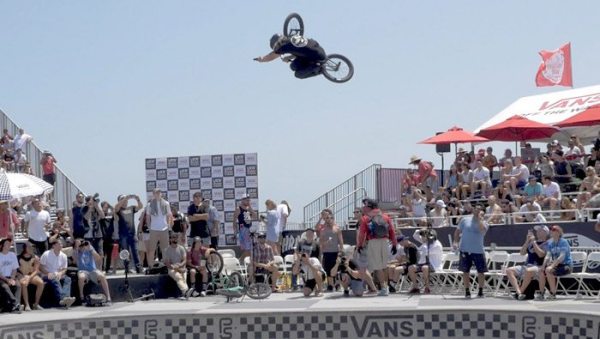 Scotty Cranmer dropped his final video from the trip out west for the Van Doren Invitational. This one gives you a look at a ton of the action that went down during the finals, along with a few final thoughts on the way to the airport. Hit play and take it all in!

“Our final day of the California trip was the day that we were all waiting for, competition day! My little brother Matty was riding amazing all week and qualified for the finals and he came ready to give it all he had! It also happened to be Trey Jones’ birthday! While waiting for the event to start Matty and Trey almost died!! They were leaning against a scaffold railing when the lock broke and Trey and Matty were pretty much holding on for dear life! As the competition began it was insane seeing some of the best skatepark riders in the world riding that concrete bowl as hard as they possibly could! But only one man could walk away the champion and $12,500.00 richer! During the event some drunk beach tweaker started problems in the stands and turned into a bloody mess! He got arrested and the show went on. After the competition Vans held a high air competition where my little brother Matty and a few other riders started blasting the deep end and Crazy Larry was the winner and he did the highest air on a bMX bike that i have ever seen out of a concrete bowl at a skatepark! It was insane! Even though the trip is over I am already getting excited for next year! Huge shout out to Vans for the great times!”