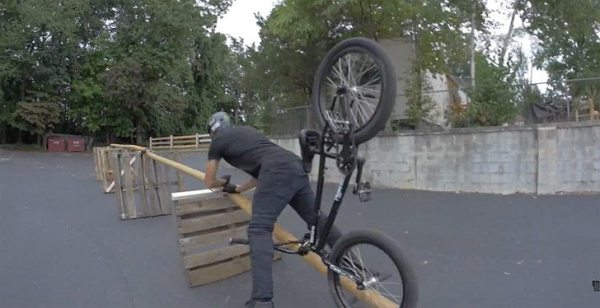 Scotty Cranmer and crew coming through with another ridiculous setup to ride. This time around they try and do the double tire challenge on a course that just wasn’t quite meant to be rode. Hit play to watch these guys see just who can double tire ride the longest.

“We spent hours making the longest and craziest double tire ride course ever on a BMX bike! This course is 103″9 long with a bonus 110ft mark for Cory “puppy arms” Berglar! when we started the challenge everyone was excited and nervous but as we tried we realized just how crazy this course actually was! After barely making it past the 1/4 mark Big Boy came in like a wrecking ball and demolished the first half of the course with his crotch! It was hilarious! Then we decided to only ride the 2nd half of the course which also proved to be insanely hard also! Big Boy took another crash but this time on his bad hip! Then I tried to go fast and go through it and I demolished the course just like Big Boy! So now we were left with 24ft of course and we all tried to be the first one through it and the ending was definitely a surprise!”