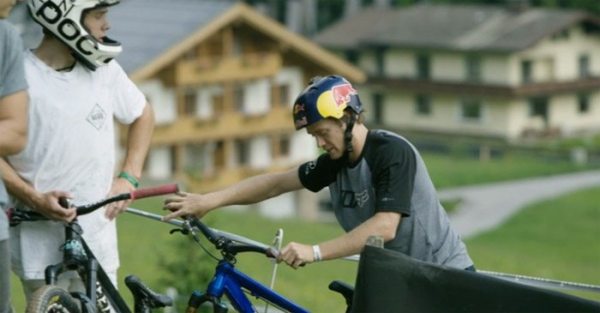 The latest episode of Drew Bezanson‘s “The Learning Curve” series from Red bull has arrived. It looks like Drew’s plan to ride downhill bikes on top of BMX isn’t quite going to plan. We’ve honestly never seen Drew get so frustrated before, so this is definitely bringing out a whole different side of him. Hit play to see how things went for his first contest. Based off the teaser for the next video, it does look like things are starting to look up though!

“It’s often said that 10,000 hours of practice are required to become a master in any field. In this latest episode of The Learning Curve, Drew Bezanson is trying to do it with just two hours of practice before his first official contest run at 26 Trix in Austria, and following a shoulder injury that knocked him out of the Swatch Rocket Air event before even getting started.
With a hectic schedule split between BMX contests and his slopestyle endeavors, Bezanson’s frustrations begin to boil over as he battles with the extremes of going from a fourth place finish at X Games on his BMX, to a less-than-stellar finish in his first recognised slopestyle contest.”