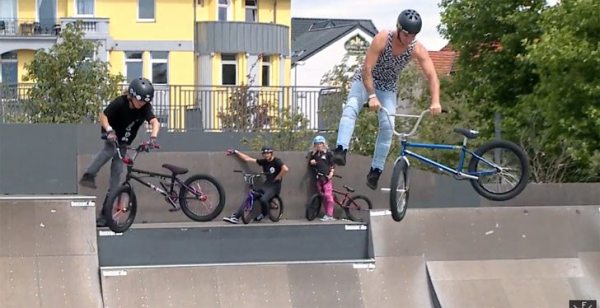 Freedom BMX coming through with a mix of footage from this years Bielefeld City Jam over in Germany! This contest was a big one with park, street and vert contests going down! Above is a highlight reel of footage giving you a look at everything from the AM’s to the Pro’s throwing down!

“The Bielefeld City Jam to the absolute required courses in the German Contest Calendar. It was also in this year again and then Fahrer_innen from all over Germany had gathered in Kesselbrink bike and skate park to go in the disciplines Park, Street and Vert at the start. We have fallen on Germany’s largest inner-city Skates investment into the fray to capture the best tricks of the weekend. Here is the result. Have fun with it!
Thanks to Benni Kopp, who not only organized a great contest, has a 540 palmed on Vert and organizes the world’s top Klowagen, but also has brought as a DJ on Saturday night the HipHop Floor at the official afterparty at Stereo for cooking. What a Thousand, oh what, what a Zweitausendsassa!

But Bennis Orgateam to be at this point not be forgotten. You’re great! Also wishes go out to Dennis Möller and Leon Binckebanck. Dennis was flown in from Freiburg with the remote bus and smashed to ten minutes after his arrival the kneecap. Ouch! Leon, however broke during Parkvorläufe at a Frontflipversuch from the rooftop tailbone. And as if that were not nice corrosive enough, he had on Sunday even the chauffeur play because he in his tour group has the only one driving license. We hope you have the ride unscathed!

Last, but not least, we wish the young man from the amateur class Park speedy recovery, which struck hard with a 360 over the box. But so bad it could not have been, because when he was carried on a stretcher lying by paramedics from the course, was a faster Dab for the audience there. Where’s the thumbs-up Emoji when you need it … ?!” – Freedom BMX